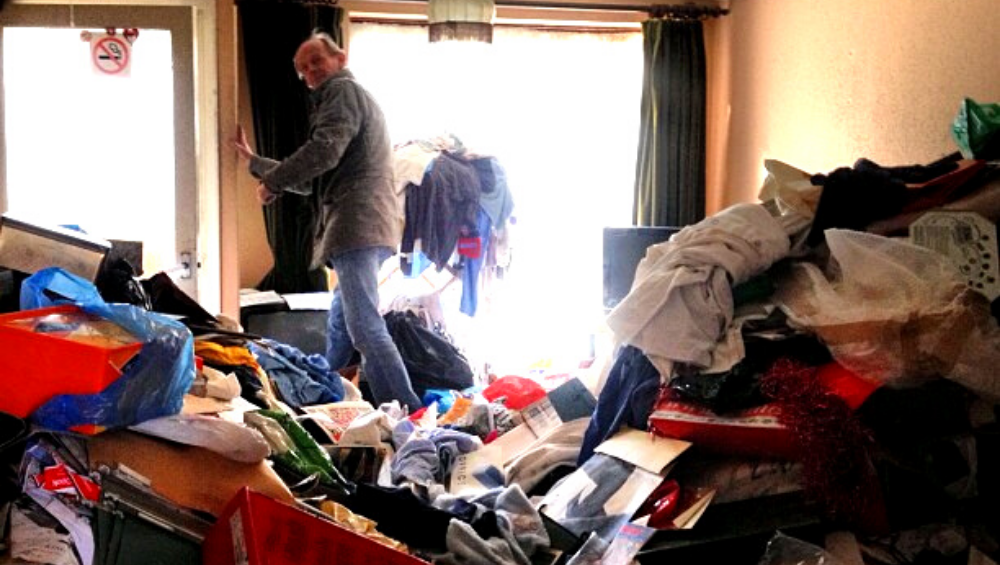 Janet could not take it anymore. Not another day, not another hour and not another minute. She could barely get into her mother’s home without tripping over all the garbage and newspapers in open cardboard boxes. Janet discussed the problem with her out of town brother, Sidney who diagnosed the situation as Senior Squalor Syndrome. It was shocking for Janet to hear that her mom’s situation had a name and was actually a serious emotional condition. “It couldn’t be true,” said Janet to herself. “The mom I knew from growing up was so organized and meticulous. My paper lunch bags were folded so neatly you could measure the creases with a ruler.”

Land’s End defines squall as a strong wind. According to the dictionary, squall is a sudden gust of fierce wind which brings storms of snow sleet and rain. We can see even from these simple definitions how powerful and harmful a condition such as senior squalor is and how seriously it has to be taken.

Janet, like many other devoted and loving daughters, had difficulty facing the fact that her mom, who suffered from this malice could no longer live alone. There are various reasons for senior hoarding. The physical arthropathy of the frontal lobe of the brain which takes care of executive functioning is one of the main causes for this condition. Executive functioning means the ability to task manage and plan for both the long term and short-term future. Miscommunication between the frontal lobes of the brain weakens seniors’ ability to concentrate on normal routine everyday tasks. It’s just too plain difficult for the senior to even clear and clean up their house properly and complete daily routine tasks.

A second cause for senior hoarding is the social isolation of the person for long periods of time without external stimulation. This condition has become aggravated this past year of the Covid pandemic with lonely seniors becoming completely isolated from family. Shock and disbelief are the emotions that junior members of the families have expressed upon entering the home of their beloved parent or grandparent for the first time in over a year.

An additional tragic consequence of senior squalor syndrome is that the helpful family members may not be able to simply clean up. The main test to find out if your loved one is a true hoarder is to offer to clean up. Whether it’s the smelly garbage or the old newspapers, the true hoarder will give any and every reason that he thinks is rational to hang on to an object. If the family member realizes that the senior is giving irrational reasons for keeping the stuff, then the senior is in major trouble and needs immediate help.

Removing the Senior to a Safe Place

The most effective strategy for treating senior squalor syndrome is to remove the senior from his house and transfer him into a supervised assisted living facility. Your senior will undoubtedly protest to you for separating him from his beloved belongings. Your senior must be supervised since in most cases hoarding is a sign of the inability to take care of himself and in some cases, dementia.

It is no longer possible for a senior living in squalor to maintain sanitary and safe standards of living while living alone. The question is where should this senior squalor be moved to? If your parent or loved one is lucid enough to make the ultimate decision, then present him with the option of moving into an assisted living facility. Professional senior care counselors do not recommend a senior hoarder moving into their children’s home since unfortunately the problem will not be resolved. Living with a senior hoarder is extremely trying since as his objects accumulate in his room, he will need more room for his possessions, and they will end up spreading out into common family areas. Do not expect your drawing boundaries to work long term as this problem will end up causing general family discord.

Before attempting a permanent move, it would be effective to insist that your senior have a complete checkup at the doctor. Some seniors were reluctant during COVID-19 to leave their homes even for a doctor’s visit unless it was by ambulance to the emergency room. Who could blame them? They could have already experienced being isolated at the doctor’s office without any relatives allowed in with them. That is really scary for anyone, especially a senior who is either physically or mentally handicapped.

Now that we are returning to normal, some doctors will allow a relative or aid to accompany the person to the examination room. It’s imperative to ask when making the appointment if the doctor’s office policy allows for someone to accompany the senior to the examination room. (I almost kept an appointment with an orthopedic doctor for my father’s bruised ankle until finding out that no one would be allowed to come in with him. He would be whisked away in a wheelchair without any family support. Luckily, we found an alternative doctor with no such rules.)

At the checkup with the physician, the senior will be examined for the distinct possibility of dementia or any other new psychological developments. Experienced senior care professionals have realized that medication for disorders such as obsessive-compulsive disorders are unlikely to work especially if the senior continues living alone. Who will know if he takes his medication?

It is very difficult for any of us to pick ourselves up and move unless we are young and adventurous. Not only don’t seniors like change, but it is also harmful for their memory and routine. However, it’s similar to being taken to the hospital for an infection. We are all aware that a person can contract infections while in the hospital. However, if someone is sick with fever and the oral antibiotics are not effective in clearing it up, the patient on the insistence of his physician will have to be admitted to the hospital to be monitored and given intravenous medications. The same holds true for a senior whose life is endangered living in their own home.

The first step is for the child or relative to check out various assisted living facilities closer to their home. It would be foolish to choose an institution only for its ratings and comforts if it is far from your home just the same way it would make no sense to put your parents or loved one in an establishment that is inferior but close to home. After visiting several facilities and assessing their value and relevance to your senior, the next step is to bring him or her for a visit to the premises. Making an appointment in advance is a must and the administrator or whoever oversees admissions will be able to sell the facility to your senior much more easily than you. These professionals are trained to speak to a senior on their level and know exactly which advantages to stress and to assure them about fears that may be felt about moving and the specific facility itself. If planned correctly, the tour could be quite detailed and pleasant, and you may be surprised at the turnaround of your parent’s opinion.

If this gentle persuasion is not successful, you will have to be more forceful and give them a different choice. Suggest, “Come for a month and see how you like it” and assure the senior that no one is giving away their home to someone else.

Hopefully the facility’s representative will be successful in convincing the senior to join the facility. With inviting recreational activities and delicious meals your senior may be convinced. Even if he or she is not, it is imperative to get him into the assisted living facility someway.

Senior squalor must be addressed asap. It’s an emergency! Fires are often caused by hoarders since their belongings become the fuel for the fire that might not have developed otherwise into something major. Here is an actual true-to-life story that happened in Maryland. Not only was the home of the senior hoarder destroyed but the next-door neighbor’s house as well. There was no way for the firemen to get into the senior’s house because of all the garbage and debris blocking the entrance and after failing to do so they were forced to break down the wall attached to the neighbor’s house to get into the senior’s home. If your senior is lucid and agreeable for you to clean their house and purge the garbage and accumulated memorabilia that’s one thing but if they refuse, get them out of there as soon as possible and into an assisted living facility preferable close to your home. Remember this is a matter of life and death. Who would want it on their conscience that their parents died because they were left by themselves in their own home? Dignity is one thing, but safety is another.